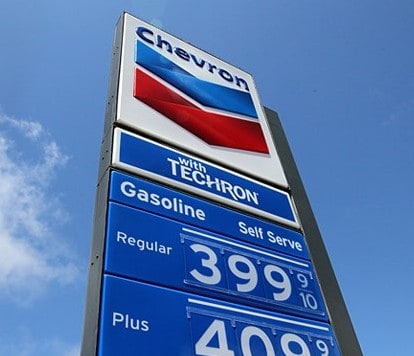 If you are thinking about applying for the Chevron credit card to save money on gas, you may want to think twice before applying. There are quite a few problems with this card that have appeared over the last few years and the program continues to go downhill.
Chevron and Texaco are major players in the fuel game. Maybe there are places that don’t have Chevron or Texaco stations, but I don’t recall ever being in an area that doesn’t have at least one.
With plenty of locations offered by each company and the fact that gasoline doesn‘t differ greatly from provider to provider, you may be tempted to get a Chevron and Texaco Visa card. They advertise an offer of 10 cents per gallon in fuel credits, which is a strong rebate on the surface but things aren’t always as they first appear.

The More Expensive Gas Becomes.. The Less You Earn With These Cards

With the fuel-price roller coaster currently climbing a big hill, you probably want to save as much on fuel purchases as possible. Finding a good gas card could be a source of significant relief on your finances, particularly if a looming war with Iran takes shape. With this in mind, how will this card work for you in terms of savings?
As mentioned, the Chevron and Texaco Visa offers a set “fuel credit” of 10 cents per gallon. You’ll have to purchase your fuel at Chevron and/or Texaco stations to receive this credit.
For non-fuel purchases at Chevron and Texaco stations, you’ll earn a fuel credit of 3 percent. While that may seem like a huge drop-off from the 10 cents per gallon that you’ll get on fuel purchases, it really isn’t. According to AAA, the national average price of gasoline is just under $3.72 at the time of this writing. So, that 10 cents per gallon works out to a savings of 2.7 percent – less than the 3 percent that you’d get by buying a pack of donuts at the convenience store.
Most other purchases will be good for a fuel credit of 1 percent.

There is a catch to the fuel credits that you’ll earn with this card. The maximum amount of fuel credits that may be earned and redeemed in a calendar year is $300.
The semi good news is that it would be fairly hard to hit that cap. Suppose that you only use this card to purchase fuel at Chevron and Texaco stations. You’d have to purchase 3,000 gallons worth of fuel in a calendar year to reach the $300 threshold.
If you drive a vehicle that gets 25 miles per gallon, that would mean that you would have to drive at least 75,000 miles in 1 year. To rack up that many miles, you could drive from Seattle to Miami and back over 11 times, based on a quick check on RandMcNally.com. If you drive that much, I’d be interested to know what you do!
Even if you decide to use the card only to purchase convenience store items, you’d have to spend $10,000 to earn $300 in fuel credits. You probably don’t need this or any other gas card if you have that kind of money to throw around at convenience stores!
So, it will be difficult to reach the $300 mark, meaning that this shouldn’t be a major burden on your rewards.

No Rewards at Other Fuel Merchants

As mentioned, you’ll earn at least 1 percent in fuel credits with most purchases when using this card. However, whether you purchase fuel or a load of soft drinks at another fuel merchant, you won’t get anything back with this card. The only fuel merchants that this card works with are Chevron and Texaco.

Other Hangups With These Cards

If you do not use your card for 6 months, you’ll forfeit all fuel credits. Also, you’ll lose all fuel credits if you close the account, so be sure to use them up before doing so if you go with this card.
The APRs are a bit high with this card. There is a 26.99 APR on purchases and a 29.99 percent APR on cash advances. However, there is no annual fee, meaning that you won’t pay a dime in fees if you pay your bill on time.
I highly recommend looking for a general rewards credit card, that allows you to earn cash back on gas – rather than a gas station specific credit card. You will earn more cash back overall, and even though the percentage of cash back on gas may be a bit lower now – when gas hits $5 a gallon you will actually be earning more because of the fact that the Cheveron and Texaco cards rewards are based on the gallon, not on the price of the fuel.