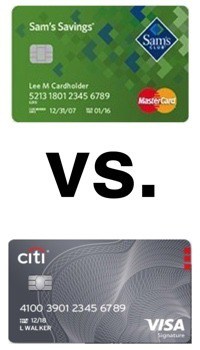 Both Sam’s Club and Costco offer their own credit cards that provide you with cash-back bonuses. But that’s where the similarities end. In this battle of the warehouse-shopping giants, Costco’s Anywhere Visa Card by Citi takes on the Sam’s Club Credit Card. Read on to find out which card comes out on top of this epic showdown.

Both Costco and Sam’s Club recently switched issuers for the warehouse credit cards. Costco very publicly left American Express to switch to Visa and issue the soon to be released Costco Anywhere Card by Citi. Less well publicized was Sam’s Club break up from Discover to offer a Sam’s Club MasterCard.

For both warehouse giants, the switch will mean better rewards for their customers. But comparing the Sam’s Club Credit Card vs. Costco Anywhere card, which offers you more cash back?​

Overview of the Sam’s Club MasterCard

Sam’s Club announced its revamped Sam’s Club 5-3-1 cash back card back in 2014. The Sam’s Club Mastercard, managed by Synchrony Financial, has earned a reputation over the last two years for its high rewards. The introduction of the 5-3-1 card also made Sam’s Club the first American mass retailer to issue a card with chip technology.

The Sam’s Club Mastercard has a very straightforward rewards program:

Overview of the Costco Anywhere Card

Costco ended its 16-year relationship with American Express in 2016. The new Costco Anywhere Visa from Citi, which launches on June 20, features boosted cash back rewards that will rival any other rewards card on the market. Like the Sam’s Club Mastercard, the card has no annual fee but it does require membership.

The new Costco Anywhere Visa has a simple rewards program:

The rewards rate is a step up from the current American Express card that earns 3% back on the first $4,000 in gasoline spending and 2% back on travel and gasoline.

The Costco Anywhere Card can also be used alongside the Executive Membership program, where you will get an additional 2% reward on your Costco purchases (and earn back up to $750 per year).* This reward bonus does exclude gasoline. So while it lets you earn 4% back in the warehouse (subject to restrictions), you will still be capped at 4% back on gas purchases.

So, which one comes out ahead in our showdown of warehouse credit cards?

If you want to participate in the Cash Rewards program at Sam’s Club, you need to pay for the Sam’s Club Plus membership ($100/year) to earn $10 back on every $500 (equivalent to 2% of spending) you spend at the warehouse in addition to credit card rewards.

Likewise, if you want earn an additional 2% on most of your Costco warehouse spending, you will need to pay for the Costco Executive Membership ($110/year).

In terms of rewards, we think the new Costco Anywhere card comes out just ahead. But barely, thanks to slightly superior rewards points on spending in the warehouse.

While a Costco membership is slightly more expensive than a membership at Sam’s Club, the new Costco Visa is definitely a winner. The new Anywhere Visa card can compete with almost any other rewards card on the market with up to 4% cash back and no rotating spending categories to worry about.

Either way, we think both cards are a winner.​ And big improvements of the prior generation of credit cards offered by Sam’s Club and Costco.