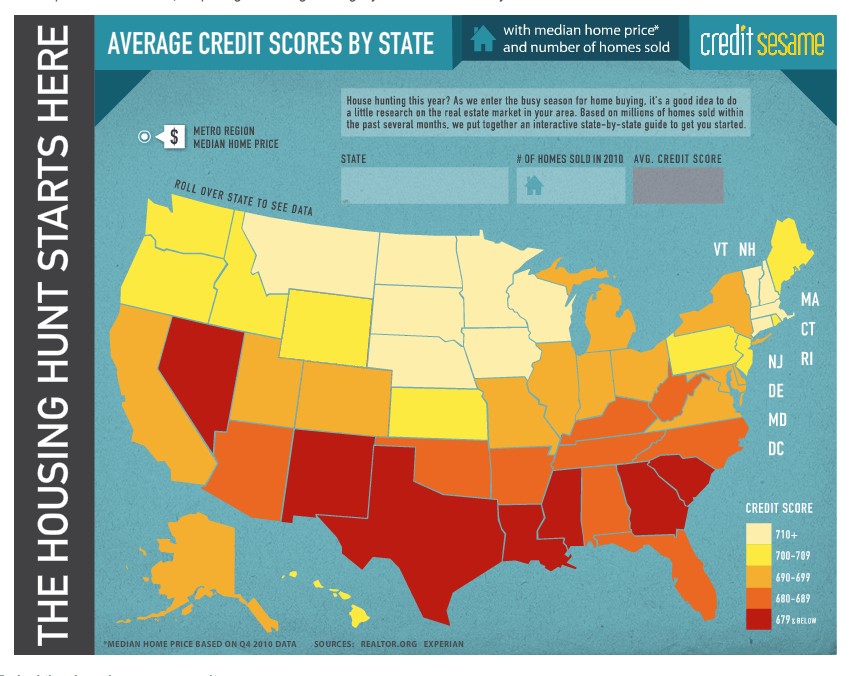 Have you ever wondered how your credit score compares to others in your area? If so, you are in luck.

Let’s take a look at which states fit in to each credit score range. What you will see is that Ssome states do better than others; and the scores are generally similar regionally.

Those who have a credit score in this range are considered to be of mediocre creditworthiness. If you are in this range, you probably won’t be buying a new boat at rock-bottom interest rates. However, you probably haven’t had 10 cars repossessed in the past 2 years, either.

Many states in what is commonly called “The South” have median credit scores in the 658-688 range. There are also a few states in the Southwest that join this group.

This is the lowest range in the entire country. The states that are in this range are the following:

States in this range have a median credit score that is good. You probably haven’t pleased the FICO gods with your every move, but you are in the game if you have this score.

At this point, the middle man in each state is starting to get better credit offers. His credit is considered to be good to excellent.

This doesn’t mean that, if you live in 1 of these states, your score is anywhere near the middle. It could be great or awful. This is just what the typical person has in such states.

States that are within this range have a median credit score that is considered to be excellent. Our middle-man – Joe Schmo – is getting lower interest rates than most people at this point and that new boat seems more realistic.

States that are in this range are scattered throughout the country. Most are northern states. Here is a list of them:

At this point, our middle-man is getting some great offers. His credit is excellent and he is cashing in on it. He probably has a stable employment history, little to no credit card debt and rarely – if ever – pays bills late.

Unclaimed Money! Scam or Not?

The states that fall into this range are all in New England and the Upper Midwest. The following states have median credit scores of 738-752:

Why is there such a broad range in the median credit scores out there? That is up for debate.

As mentioned, many of the states with the lowest median credit scores are in the South and Southwest. This could be due to the subprime mortgage crisis, as many of these states have had higher rates of housing development than the rest in recent years.

People with weak credit scores were given access to homes that they couldn’t really afford. States such as Florida, Texas, Nevada, New Mexico and South Carolina are known hotspots population growth and housing development, so it stands to reason that a lot of people suffered credit disasters in such states.

On the other end of things, take a drive through the Northeastern US – where the median credit scores tend to be higher – and you probably won’t see nearly as many new housing developments as there are in the South and Southwest. It’s anybody’s guess, but I’m sure that the subprime crisis has something to do with it.

How does your score compare to the median in your state? If it is better – great! If not, you can always improve it or, if you already own your own home – buy with cash!