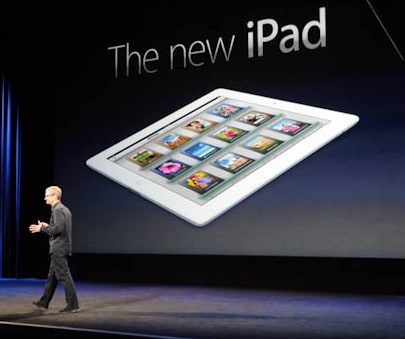 How To Redeem Your Credit Card Points For the New iPad

Yesterday it was reported that Apple sold in excess of three million 3rd generation iPads in the four days since launch. There is no doubt that this is one of the most sought after gadgets ever.
If you’re looking to upgrade or are buying an iPad for the first time don’t overlook the thousands of credit card points you may have accumulated over the years! Many people are surprised to find out they can get redeem their points for the latest Apple gadgets. However not all rewards programs were created equal, and today we are going to compare the various programs.
We’ll assume that you are looking for the 16GB with Wi-Fi and 4G version of the new iPad, which is listed at $629 at the Apple Store. Most credit card points are valued at $0.01 so we will use that number for our comparison as well.
Let’s take a look at how many points you’ll have to use with each issuer to get the a 3rd generation iPad (when they become available through the respective programs).

With American Express’ Membership Rewards program, you’ll have to use 118,400 points to get the new iPad. That’s not so bad, right? After all, these are points that you earned based on purchases that you already made, so you are basically getting this for free.
Despite your points being a bonus on your previous spending, the dollar value of 118,400 points is $1,184. This is nearly twice the value of the iPad 3, meaning that you’ll be getting royally screwed if you take this deal.
It would be much better to use your points on another item (or more) that offers a more fair deal or use rewards that you may have earned on another card.

To purchase the new iPad with your Capital One points, you’ll have to redeem 163,250 points. That’s equivalent to spending $1,632.50 out of pocket for a $629 item.
Of all the major credit card issuers, Capital One’s deal is the worst.
If you have any other credit card, it would be better to use your points on it for the new iPad and try to find a better deal on something else that you intend to buy with your Capital One points (travel).

Citi’s deal is much better than those mentioned thus far. You’ll need 66,500 ThankYou points – a $665 value – to pay for the $629 iPad.
In general, Citi offers deals that are much more in line with the actual dollar value of the points that are required than many of it’s competitors offer. This is something to consider for your shopping needs in general if you prefer to shop through the issuer’s network.

With Bank of America, you’ll need 75,300 WorldPoints to purchase the 3rd generation iPad. That comes out to $753 in value, meaning that you won’t have to pay an arm and a leg in rewards. Still, you’ll overpay and should consider other options.

The Verizon Plan: Know The Credit Requirements and Fees Before You Sign Up This 2023

Obviously, Chase offers the best deal on the new iPad through the Ultimate Rewards Mall. However, it would be interesting to see just how far the others are off in an up-close comparison. Let’s take a look at how much of a premium that you’ll have to pay with each program:

As we can see, you’ll have to pay a premium with every issuer in terms of the actual value of the points that you’ll redeem. However, there is a drastic difference between the best and worst offers.
With Capital One’s offer, you’ll have to effectively pay a whopping 160 percent premium for the new iPad. On the other end, you’ll have to pay a 2 percent premium when using the Chase Ultimate Rewards program – not a bad deal at all when compared to the rest.
It’s very important to note that we do have to make several assumptions, so your results may vary from those listed. The 3rd generation iPad is not yet listed under any rewards program at the time of this writing, but it has the same retail price as the iPad 2, meaning that it is reasonable to assume that the same (or close to it) points will be required to purchase it. Also, we assumed an average of 1 point per dollar spent, but variations in rewards programs could tip the scale in favor of another program (instead of Chase).
Still, as I tend to find Chase’s rewards offers the best, it is reasonable to assume that Chase customers will receive the best deal – even though there still is a markup. If you have cards under multiple issuers, it is definitely worth it to do the math and see which issuer your points will retain the most value with.