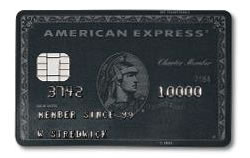 How To: Get an American Express Centurion Card

More than any other credit card, the American Express Centurion Card proves elusive to those who want it most.

It’s the credit card that began as an urban legend. Back in the 80s, people told tales of a special, secret “black” credit card that promised the next-to-impossible for those who earned an account.

The legends say that cardholders could order a helicopter and have it delivered to the middle of the desert. According to Snopes.com, one cardholder claimed to purchase the horse Kevin Costner rode in Dances with Wolves.

Reality, of course, is not quite so intriguing.

But a special “black” credit card, called the Centurion card and offered by invitation only through American Express, does exist. In fact, the AMEX black card is one that a lot seek but few get due to the black card credit card qualifiers.

A spokesperson for American Express told Snopes.com that one CardMember purchased a Bently and another used the Centurion card to charter a jet.

It’s not a helicopter in the desert. Nut it’s still off the beaten path.

The American Express Centurion card, known for its distinctive black color, offers many of the same travel perks and benefits as a standard American Express Platinum card. But it takes customer service to a new level.

The concierge service is available to both the CardMember and friends and family. Air travelers get automatic upgrades to first class and premium rooms at five-star hotels. My favorite perk? American Express can get a high-end store to close for a few hours so you can shop uninterrupted, with the full attention of the sales staff.

I’m a few years, a couple of dollars and several dozen points on my credit score away from obtaining a Centurion card invitation. Fortunately, internet entrepreneur and American Express Centurion CardMember Neil Patel offers a comprehensive overview of the card and its benefits on his blog at Quicksprout.com.

How to Get Invited

So, the answer to your number one question: How do you get invited to be an American Express Centurion Cardholder?

There is no application process. You won’t get the card just by asking American Express.

This is not your run-of-the-mill pre-approval junk mail. This is an honor bestowed upon the ultra-wealthy or business owners who write a lot of business each year.

But, if you meet the following criteria, you might be invited to receive the card.

The criteria are as follows:

Business owners, too, can reach these numbers if they use their Amex card to pay a payroll company, who then issues checks to employees. Add in utilities, telecommunications, and anything else required for day-to-day operations in an office and business owners should have no problem reaching this amount.

However, although American Express advertises “no pre-set spending limit,” it may be hard to get such high amounts authorized.

Creditrepair.com – Is It Worth It?

Patel makes a wise suggestion to alleviate this problem: Write a check to Amex at the beginning of the month, pre-paying your expenses for that month.

Before you start charging anything in your quest for the Centurion Card, you will need an existing American Express Card.

The American Express Premier Rewards Gold Card is currently the best option for high spenders. There is an annual fee (which is waved for the first year), however if you are going to be charging $250,000+ a year it will pay for itself in the first month.

It Doesn’t Hurt to Ask

American Express tightened its requirements for Centurion cardholders so the card would maintain its prestige. Even if you meet the criteria, American Express may not extend an invitation — for reasons no one knows.

However, it doesn’t hurt to call and ask for an invitation. Or, you can skip the red tape and do it Patel’s way: Work with (or for) a company who issues Centurion cards to consultants, board members or high-ranking employees.

Once proven you’re worthy of the Centurion upgrade, be prepared for one more expenditure: hefty fees.

The Centurion card carries a one-time activation fee for the first year of $5000, plus an annual fee of $2,500 for the primary cardholder and $1,500 for each additional card.

Membership has its privileges — but also its price.

Other AMEX Cards To Consider

If you can’t get your hands on the AMEX black card, don’t worry, American Express has a wide range of great cards with great rewards. The AMEX Everyday Preferred credit card and the AMEX Blue Cash card are both great options.